On September 11, the parliamentary elections will culminate in Election Day, which, in turn, will end with vote counting, a procedure of extreme secrecy, according to election officials. Meanwhile, it is the vote count that has traditionally triggered fierce criticism of both domestic and international observers, not to speak of opposition candidates running for Parliament. The observers’ recommendations are that the vote counting procedure needs more transparency.

“Clear and transparent procedures for counting should be established and strictly implemented. Consideration should be given to announcing and displaying the choice on each ballot. The tallying of results and completion of results protocols should be conducted in an open manner that provides for meaningful observation.”

Procedure for the vote count in Belarus

Currently, vote count in Belarus resembles an undercover operation. Each member of the commission silently counts his or her part of the ballots with their backs to the observers. Then, in complete silence, the results are written on a piece of paper and given to the chairman of the commission, who sums up the calculations and compiles a final protocol for the polling station. Thus, when signing the protocol, the election commissioners actually confirm the figures that they’ve never seen, because they only witnessed a small part of the ballots that they counted themselves, and they have to trust both the results claimed by other members of the commission and the magical ability of the chairman to correctly add the numbers. The observers, in turn, may only see the ballots scattered across the table, or, at worst, face the backs of the commission members.

Thus, what we can see is a classic example of collective responsibility, when none of the commissioners questions the origin of the final figures. Each of the participants in this calculation, except for the person who announces the final figures, can rightly say that he or she has not rigged the election results.

My personal opinion is that if the Belarusian authorities had allowed a transparent counting procedure during last year’s presidential election, the international observers’ conclusions would have been more positive.

Ahead of this year’s parliamentary elections, the authorities decided to improve their reputation and tried, without changing the essence of the special operation, to create the appearance of a transparent vote count.

In late 2015, an interdepartmental working group was formed to change the practice of applying electoral legislation. The group was initiated by the Central Election Commission, whose head, Lidziya Yarmoshyna, said that one of the major changes should result in the system of a transparent vote count.

The results of the group's work were published in the Guidelines for Precinct Election Commissions approved by the CEC on May 17. As a response to the criticism about the lack of transparency of vote counting, the following layout was proposed for those present during the vote count. 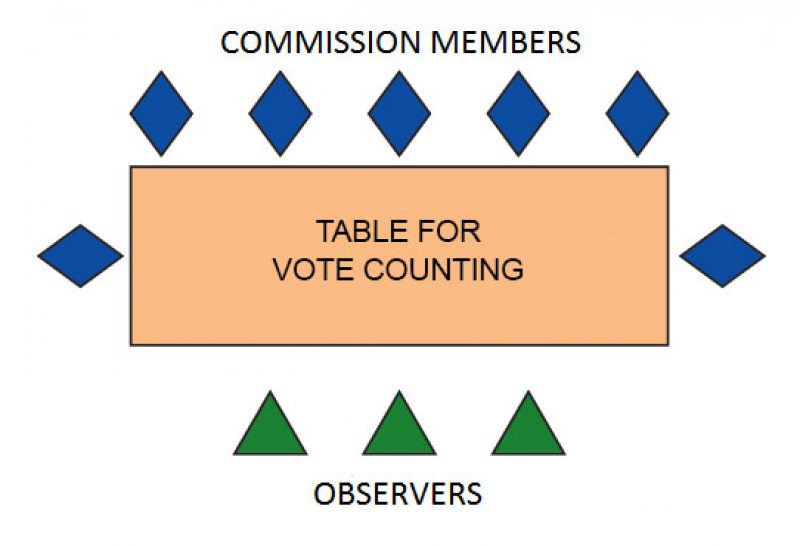 Thus, without changing the essence (since the commission members still count the ballots separately), it was proposed to arrange the observers so that they did not see the backs of the commission members, but their faces and hands. In this situation, the observer, of course, cannot make sure that the choice of each voter has been correctly counted.

Local independent observers immediately said that it did not matter where the observers were seated (they can sit even on top of the table), because as long as the procedure remains unchanged and does each ballot is not demonstrated to all members of the commission and the observers, such counting of votes will not be recognized as transparent.

Lidziya Yarmoshyna was quick to say that the commissions do not have the right to show the ballots, since it is not provided for by the Electoral Code.

This response shows an interesting evolution of the legal thought of the Central Commission. During last year’s presidential election, the campaign “Human Rights Defenders For Free Election” proposed to introduce a transparent vote counting procedure, but the Central Election Commission said that each commission was free to decide on how to count votes. However, it was hard to explain why the CEC did not unify the approach, if it was truly legitimate. Therefore, Ms. Yarmoshyna decided to refer to Article 55 of the Electoral Code. At the same time, the article does not contain a clear algorithm of actions by the election commission during the vote count. The article refers to the sequence of actions and procedures for the counting of votes and that the count is carried out directly by the commission members. However, the votes should not be counted separately. The counting should be carried out by one member of the commission, who will then announce the choice of the voter and display each ballot to all members of the commission and the observers.

Such procedure is provided by the laws of all the neighboring countries. Belarus is the only country in the region with a covert special operation, which our government proudly calls the vote count.

If we look at the only international act in the field of elections that Belarus has so far ratified, the Convention on the Standards of Democratic Elections, Electoral Rights, and Freedoms in the Member States of the Commonwealth of Independent States, Article 14 of the Convention, which regulates the rights of national observers, says that the observer has the right “to observe the counting of the votes in the conditions providing visibility of ballot counting procedure.”

The key aspect is the visibility of ballots, which is inaccessible for both national and international observers working in Belarus.

Here’s a small overview of electoral laws, which reflect the procedure of vote counting in other countries of the region.

“When sorting ballots, voting members of the precinct election commission shall announce the voter’s mark contained in the ballot and show ballots for visual inspection to the persons present at the counting of votes. Simultaneous announcement of the voters’ marks contained in two or more ballots shall not be permitted.”

The rule is simple and clear. Moreover, it says that it is prohibited to announce the contents of more than one ballot at a time.

Article 42 of the Electoral Code of Azerbaijan says that the observer has the right to:

“42.2.7. to watch, in circumstances ensuring observation and from a certain distance, the counting of votes, marked and unmarked ballot papers, in order to check the vote’s validity, and to become familiar with the election commission’s protocol on voting results and election (referendum) returns (overall returns) and other documents.”

Article 60 of the Electoral Code of the Republic of Armenia reads as follows:

“After having sorted all the ballot envelopes and ballots in the ballot box, the commission chairperson shall count, in the presence of the commission members, one by one, the number of ballot envelopes of the established specimen, ballots recognized as invalid, ballots voted for each candidate or political party (alliance of political parties), or, where only one candidate is voted, the ballots cast for or against such candidate.”

It is obvious that Russia, Armenia and Azerbaijan are quite far from meeting the standards for free and fair elections, but their laws have secured a transparent vote count. Therefore, electoral fraud is taking place at the stage of voting, not during the counting of votes. Most typical violations in these countries are ballot stuffing, bribery of voters, and other means of rigging voting results.

In Belarus, where the counting of votes is under an absolute administrative control, it does not matter what is really written in the ballot, because it is impossible to verify these data.

Let's see how things work in the countries where rigged elections were one of the reasons for the change of power.

Article 56 of the Electoral Code of the Republic of Moldova gives the following description of the counting of votes:

“The precinct must be provided with a sufficient number of tables so that all ballots taken from the ballot boxes may be counted in one place visible to all members of the precinct bureau and others in attendance. Badges with the names of the candidates shall be placed on the tables for vote counting.”

Moldovan experience is valuable because the Code itself, just like its Belarusian counterpart, does not contain an exact counting procedure. All details should be decided by the election commissions of different levels.

Part 7 of Article 56 of the Electoral Code says that:

“According to a procedure determined by the precinct electoral bureau, or upon instructions provided by the Central Election Commission or competent district electoral council, members of the precinct electoral bureau shall unfold the ballots and determine for which candidate the ballot was cast. The ballots for each candidate shall be counted and packed separately, and the results of the counting shall be entered on a special counting sheet as they are determined and will be communicated to superior election administration body.”

All the above bodies traditionally define the procedures based on the fact that the commission members and observers should be able to see each ballot during the vote counting.

Thus, the procedure of transparent counting of votes can be resolved by the decisions of election commissions, provided there is genuine will to carry out truly transparent and fair elections.

Article 90 of the Law of Ukraine “On Elections of People's Deputies of Ukraine”, para. 15:

Article 62 of the Electoral Code of Georgia describes the perfect counting process of vote counting:

2. One of supervisors selected from among observers shall stand next to the second counting officer as referred to in paragraph 1 (a) of this article, and another supervisor shall stand next to the third counting officer as referred to in the same subparagraph. Supervisors shall have the right to observe the entire procedure of counting votes, make remarks on errors, require rectification of errors, and unless the requirement is met, appeal the PEC action to the higher DEC, and thereafter in court. Persons authorised to be present at a polling station may require the counting officer to put aside any ballot paper raising doubt about its validity.”

It should be noted that the Georgian Electoral Code is only law that provides for the ample powers of observers during the counting of votes. The Code, including the cited extract, looks like a piece of law from another planet. Indeed, for us, citizens of Belarus, such a procedure is a dream, not a reality.

Thus, the Belarusian electoral laws and the practice of their application look archaic and absolutely opaque even in comparison with other countries in the region.

Finally, for Lidziya Yarmoshyna personally, if she reads this, I would like to quote a fragment of the regulations on the elections to the Supreme Soviet of the USSR, approved by Decree No. 2 of the Presidium of the Supreme Soviet on January 9, 1950. If the Belarusian authorities like retro, the following provisions can be added the electoral legislation without any changes at all:

Article 87. The chairman of the precinct election commission shall announce in the presence of all members of the PEC voting results on each ballot."

coordinator of the campaign "Human Rights Defenders For Free Elections"