The term of ‘political qualities’, which has no explanation in the electoral law, but remains an important criterion for the selection of candidates to the election commissions, should be removed from the CEC’s Decision No. 18, says Pavel Sapelka, analyst of the campaign Human Rights Defenders For Free Elections.

Human rights activists are pessimistic about the introduction of the notion as a criterion in selecting election commissioners. Arguing that such vague terms create much room for interpretation, they wrote to the Central Election Commission asking to clarify the notion. However, the CEC was in no hurry to react, which was stressed in a milestone report on the results of the formation of territorial and district election commissions. Shortly after the report was released, Pavel Sapelka received a reply signed by the CEC chair Lidziya Yarmoshyna. Ms. Yarmoshyna said that “the electoral law does not contain any legal interpretation of such concepts as business and political qualities of the person selected for the composition of the election commission”, and further continues to admit that the concept of ‘political qualities’ has been replaced by the term of ‘political beliefs’: “The political qualities include political views, the level of representation of public associations and political parties in the region, their recognizability and credibility among the population.”

After receiving this response, Pavel Sapelka again wrote to the Central Election Commission urging Ms. Yarmoshyna to remove the term of ‘political qualities’ from the CEC’s document. This will ensure that this criterion could not influence the representation of opposition parties in the election commissions, as it was at the previous election stage. 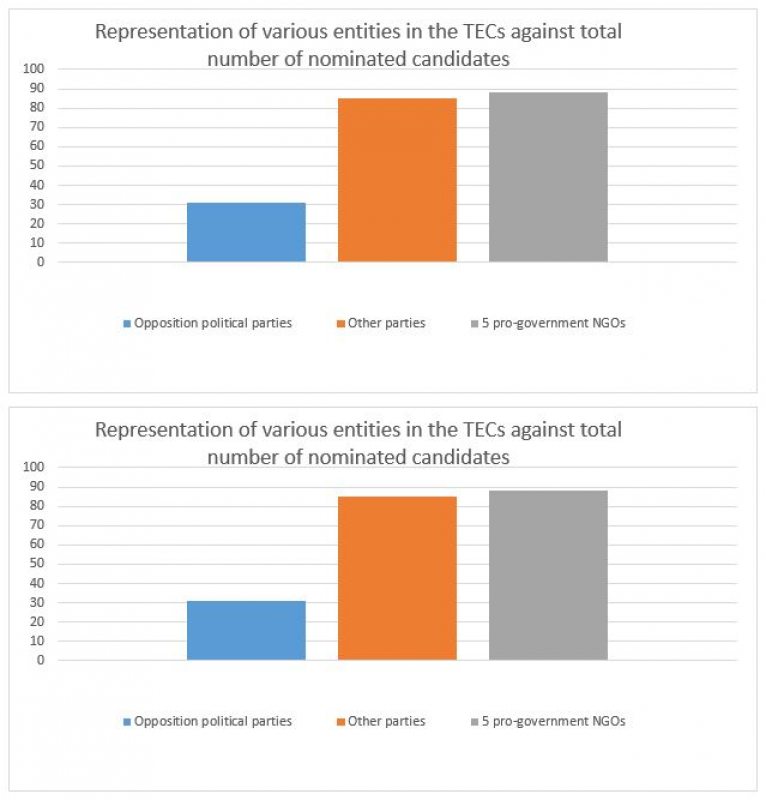 “As the practice of formation of the TECs and DECs showed, it was the assessment of the political views of persons nominated to these commissions that was the primary cause of politically motivated selective approach to address the issue of their membership. Persons who hold political views that do not coincide with the official policy of the current government and belong to the opposition political parties were widely denied membership in the election commissions, while representatives of loyal political parties and organizations received much more seats,” notes Pavel Sapelka in his letter to Lidziya Yarmoshyna.

Such concepts as the recognizability and credibility of a particular political party or association require further study of the issue by means of public opinion polls, which is a hard task in the short period allocated for the formation of election commissions, but otherwise, opinions of the representatives of local authorities in charge of forming the commissions may not coincide with the actual opinions of citizens, emphasizes the lawyer.

To justify his words, he refers to the definition of ‘political qualities’ in the field of social science: “a totality of knowledge and skills acquired the person and necessary for his or her participation in the political life of society” (N.E. Yatsenko, Explanatory Dictionary of Social Science Terms. Saint-Petersburgh, 1999).

“According to this definition, a person’s political qualities are solely his personal qualities and do not depend on the evaluation of various political entities, their credibility and popularity in the society. So I think it was a mistake to include the term in the decision of the Central Election Commission, as its explanation is not provided by the current electoral law and is highly debatable,” insists Pavel Sapelka.

This year’s parliamentary elections was launched after certain minor changes of the electoral law made in 2013. The main novelty was the introduction of a provision that obliges executive bodies to consider the business and political qualities of the persons nominated to the commission before making a decision on its formation. According to the conclusions of the campaign Human Rights Defenders For Free Elections, Decision No. 18 failed to contribute to greater political pluralism in the formation of the TECs and DECs: the lack of clear selection criteria resulted in the selective approach to the formation of election commissions.

The campaign"Human Rights Defenders for Free Elections"is a non-partisan initiative and does not intend to support political parties and politicians. The entire election process is assessed solely on the basis of the principles of free, democratic and transparent elections, which can enable the people of Belarus to fully exercise their constitutional right to participate in the government of the country.